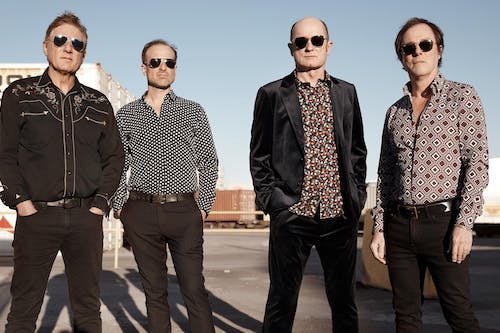 An Evening With Hoodoo Gurus

Hoodoo Gurus’ performance at Great American Music Hall on September 15, 2021 has been postponed to April 23, 2022. All original tickets will be honored at the show and no exchange is necessary.

Formed in Sydney in 1981, the band were led by singer/songwriter Dave Faulkner, along with drummer James Baker. Ex-Scientist Rod Radalj and Kimble Rendall rounded out the group's lineup and their unique sound (three guitars, no bass). With Faulkner's infectious songs they quickly earned a record deal. After the 1982 debut single "Leilani," both Radalj and Rendall quit, replaced by guitarist Brad Shepherd and bassist Clyde Bramley. In 1983, the Hoodoo Gurus recorded their excellent debut record, Stoneage Romeos. Mark Kingsmill replaced Baker in 1985 but along came 1985's college radio smash Mars Needs Guitars! With 1987's Blow Your Cool, the Hoodoos appeared poised for the big time; their tourmates, the Bangles, even contributed to the singles "What's My Scene" and "Good Times”. In this time Bramley exited, replaced by onetime Divinyl Rick Grossman. Released in 1989, Magnum Cum Louder provided the singles "Come Anytime," and "Another World". 1991's Kinky featured "Miss Freelove '69," alongside enduring fave “1000 Miles Away”. After a three-year hiatus, the Hoodoo Gurus returned with the harder-edged Crank. Blue Cave followed in 1996. In 1998, the Gurus announced they were splitting up but two years later, Dave Faulkner, Brad Shepherd, and Mark Kingsmill were working together again as members of the garage-influenced the Persian Rugs. In 2004 the band reunited, releasing a new album, Mach Schau. In 2009 the band issued their ninth album, 2010's Purity of Essence.