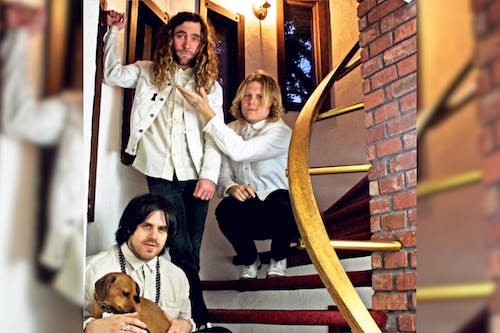 Fuzz’s performance at Great American Music Hall on January 22, 2021 has been postponed to December 14, 2021. All original tickets will be honored at the show and no exchange is necessary. Doors will now open at 7 PM and the show will start at 8 PM. If you would like a refund, please contact your point of purchase before January 3, 2021 at 5 PM PST. No refunds will be processed after the deadline.

Living up to their name, Fuzz take influence from heavy, caustic, fuzz pedal-worshiping '60s proto-metal and psychedelic acts like the Groundhogs, Jimi Hendrix, and Blue Cheer. Formed by Ty Segall and his sometimes-bandmember Charles Moothart, Fuzz's albums peruse a simultaneously stripped-down and overloaded sound that could have been released in 1972, especially on their Steve Albini-recorded, eardrum-pummeling record from 2020, III.

The band formed as a duo with Moothart on vocals and guitar and Segall on drums and vocals, and eventually expanded to include longtime friend Roland Cosio on bass. Their earliest recordings came in the form of immediately sold-out 7"s on In the Red and Trouble in Mind, and they followed those with a self-titled full-length in late 2013. A live EP, Live in San Francisco, followed later that year on John Dwyer's (of Thee Oh Sees) label, Castle Face Records. Segall stepped away from the band to tend to his many other projects in 2014. Fall 2015 saw the release of Fuzz II and an American tour in support of the album.

Over the next few years, the members stayed busy with other pursuits -- Segall with numerous solo albums, Moothart with his band Meatbodies -- and when they got back together to make more music it was with new bassist Chad Ubovich, also of Meatbodies. The trio recorded 2020's III with Steve Albini, whose legendary skills as an engineer captured the sound of the band playing live with minimal overdubs. The result is their heaviest, most Black Sabbath-sounding record to date. It was issued in October by In the Red Recordings. ~ Fred Thomas & Tim Sendra, Rovi