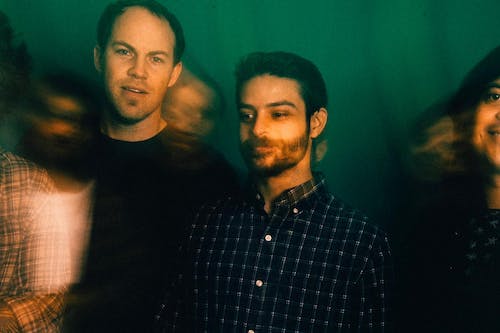 When Hail The Sun entered the studio to record what would become their highly-anticipated fifth full-length album, New Age Filth, they knew they were setting out to release their most ambitious material to date. The band, consisting of Donovan Melero (vocals/drums), Aric Garcia (guitar), John Stirrat (bass) and Shane Gann (guitar), spent five weeks with producer Kris Crummett which resulted in their most collaborative and diverse album yet.

“Domino”, the energetic first single off of the record, showcases the band’s technical prowess with instruments dancing over one another as vocalist Donovan Melero belts out his signature high-pitched vocals. Lyrically, the track centers around reflection of self and how past actions can affect others. On writing “Domino”, Melero stated, “Reflecting is important. What we might discover in reflection can be a hard pill to swallow. I’m only as big as my weakest character flaw. I’m told that I talk a lot in my sleep, and these are the things I think I say.”

Hail the Sun’s New Age Filth includes tracks that are heavier and poppier at the same time, proving their ability to be extremely technical in instrumentation while also unleashing some of the catchiest hooks they’ve ever created. The influence from genre-melding predecessors like Coheed and Cambria, At The Drive-In, and even Yes is apparent, but the sound is still very much a natural evolution from Hail The Sun’s past work.

The shifting musical compositions on New Age Filth perfectly accompany the emotive lyrical outpour found across the album. Continuing along the theme of reflection, Melero weaves through painful and emotional experiences of love, cynicism, and touches on how awful humans can be to one another.