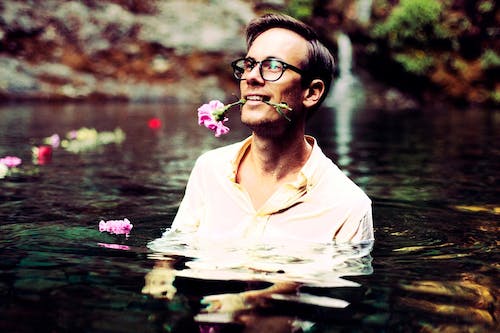 VIP UPGRADES HERE: https://www.hellogoodbye.net/shoppe/?category=Shows&featured=S000 [DOES NOT INCLUDE SHOW TICKET]

- 7" with 4 previously unreleased songs from the wiky era

- "WOULD IT KILL YOU JUST TO LET IT ALL WORK OUT?" Enamel Pin

- HGB to give you a sticker at the show

When Hellogoodbye formed in the early 2000s, they were quirky, fun-loving emo rockers from California who took as much influence from the Nintendo sound bleeps of their childhood as they did modern pop-punk. The group infused its playful brand of indie power pop with sugary sweetness, catchy dance beats, and enough energy to tire a group of five-year-olds. After signing with Drive-Thru Records and establishing themselves, they scored a big hit in 2006 with the romantic electro pop ballad "Here (In Your Arms)." Instead of following up in a similar vein, the band shifted to a lush indie pop sound on 2010's Would It Kill You?, and by the end of the decade took a leap onto the dancefloor on 2018's disco-influenced S'Only Natural, an album that saw Kline coming into his own as a crooner, and which felt like the work of an entirely different band.

Hellogoodbye, named after a quote from Saved by the Bell's Screech Powers, comprised vocalist/guitarist Forrest Kline, bassist Marcus Cole, keyboardist Jesse Kurvink, and drummer Chris Profeta. They released their self-titled EP as a free download on their label's website, and the physical album hit stores with an additional track in November 2004 on Drive-Thru (where Kline used to intern). The move worked to the band's advantage and its music quickly spread; the single "Shimmy Shimmy Quarter Turn" made minor waves on MTV and garnered the band a pretty notable following for having only a handful of songs to its name.

Extensive touring commenced, as they joined (which often included water guns, confetti, and costumes) bands like the Format and the All-American Rejects. The music video/live DVD OMG HGB DVD ROTFL appeared in the fall of 2005, and by the year's end the band had won the on-air MTV Dew Circuit Breakout contest, beating Over It and Tub Ring in the end. Early 2006 was spent playing sold-out nationwide dates as openers for the Academy Is... before hooking up with Motion City Soundtrack and Straylight Run in the spring for the MTVU Campus Invasion Tour. A spot on May's Bamboozle festival preceded a summer spent on the Warped Tour. All this activity ultimately led up to the release of their highly anticipated full-length Zombies! Aliens! Vampires! Dinosaurs!, which finally hit stores that August. The album was a chart success as "Here (In Your Arms)" raced up the singles chart.

After more touring, the band began to run into some problems. First came the departure of Jesse Kurvink, then more lineup shuffles and a protracted lawsuit led to a lack of product from the band until a self-released single ("When We First Met") arrived in late 2009. By then they had shifted musical direction away from emo-pop and toward a lush indie pop sound free of Auto-Tune and novelty songs. By the time they released their 2010 album, Would It Kill You?, the band consisted of Kline (who played nearly everything on the album himself), drummer Mike Nielsen, bassist Travis Head, keyboardist Joseph Marro, and guitarist Andrew Richards. The group toured after the album's release, garnering a spot on the 2011 Warped Tour. Marro left the band in early 2012, citing family issues, to be replaced by Augie Rampolla of You, Me, and Everyone We Know. Later that year, Old Friends Records signed the band and re-released Would It Kill You? with a couple bonus tracks.

The next album was another Kline solo project apart from the drums and some horn and string parts, and brought some '80s influences to the table. Co-produced by Joe Chiccarelli, Everything Is Debatable was released in late 2013. The band headed out on tour as opening act for Paramore and Metric, but didn't release more music until 2015, when they made a single titled "I Wanna See the States" for a geography promotion run by PBS. They then took some time off before returning in 2017 with an orchestral pop-influenced single, "Stare Into the Black," and a six-date tour playing Zombies! Aliens! Vampires! Dinosaurs! and Would It Kill You? in their entireties. Kline had begun working on the next album by this point, and he took a giant leap into the smooth-disco-with-strings-and-horns sound Hellogoodbye had dipped their toes into on Everything Is Debatable. S'Only Natural was released in October of 2018 and featured many tracks that sounded airlifted from a sweaty discotheque circa 1978 along with some that had a strong modern R&B influence. ~ Corey Apar, Rovi