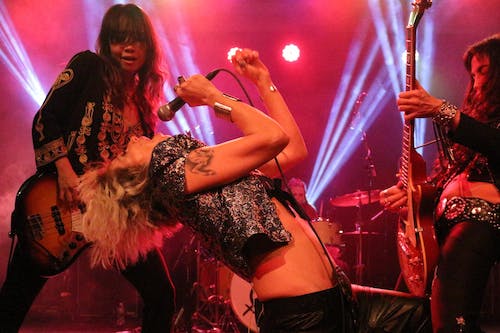 Lez Zeppelin’s performance at Great American Music Hall on July 31, 2021 has been postponed to August 21, 2021. If you’ve already purchased tickets, don’t fret: all original tickets will be honored at the show and no exchange is necessary. If you would prefer a refund, please contact your point of purchase.

Lez Zeppelin is the premiere Zeppelin tribute band of the Northeast, rocking out from Madison Square Garden to the Met to hundreds of sold out dates from Atlantic City to New York City to Boston.

Hailed by SPIN Magazine as “the most powerful all-female band in rock history” in the hard rock “tribute” bands genre, Lez Zeppelin has gained worldwide critical acclaim for the musicianship, passion and gender-bending audacity they bring to the music of Led Zeppelin.

They have been featured on The BBC, CNN, ABC, CBS, MTV, VH-1, FOX and radio shows worldwide, including SIRIUS XM and NPR.

Jimmy Page attended their show in London and said of the group, “They played the Led Zeppelin music with an extraordinary sensuality and an energy and passion that highlighted their superb musicianship.”

They will be in San Francisco for a rare California date. Do not miss it.

(All profits from this concert will go to the City of Hope Cancer Research Center. Visit punchcancer.net for more details.)