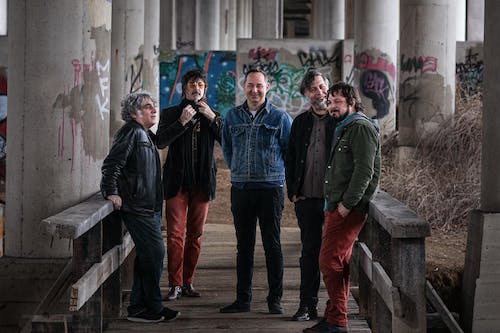 The old saying “you can’t go home again” is most often true. Life moves on and nothing stays the same, but that’s certainly not the case for songwriter Greg Cartwright, who returned to his home city of Memphis to record the new Reigning Sound album, A Little More Time with Reigning Sound.

It’s been over 15 years since Cartwright uprooted to Asheville, but this new Memphis-made record shows the songwriter in top form and wholly inspired by his birthplace. And it’s not only the terrain that’s familiar: For this new LP, Cartwright also reunited with Reigning Sound’s original “Memphis lineup” of Jeremy Scott (bass), Greg Roberson (drums), and Alex Greene (keyboards), all of whom played on the band’s earliest recordings. The new songs explore fresh lyrical and musical territories but at times also tastefully echo back to Reigning Sound’s Break Up, Break Down and Time Bomb High School. That’s not by chance—it’s just what happens when these musicians get in the same room. Their sonic chemistry hasn’t faded a bit.

A Little More Time, Reigning Sound’s seventh proper full- length, is the original lineup’s first in-studio collaboration since 2005’s Home for Orphans LP, which Merge reissued last year. Ultimately, that 2020 reissue laid the groundwork for the outfit’s reunification. “One thing led to another,” Cartwright explains. “When Merge reissued Home for Orphans, to promote the LP we booked a little string of shows with the original lineup. We still love to get together and play every couple years.” The short reunion tour wrapped up just as the pandemic hit the United States, and soon after, Cartwright found himself with a batch of new songs. With Reigning Sound’s current lineup based in New York City, a COVID-19 hotspot at the time, Cartwright made the decision to produce the new record back in Memphis—though he did regret not being able to work with the players behind 2014’s Daptone-recorded Shattered. “It was not something I anticipated, making a record with the original lineup again,” Cartwright says. “Mainly, because I had guys I was playing with, and we had an established dynamic that was working. I’m happy with the guys in New York. They’re all great players. We’ve had fun playing shows and making records for many years.”

In addition to working with his old bandmates on A Little More Time, Cartwright enlisted an old friend, acclaimed producer Scott Bomar (Al Green, William Bell) at Electraphonic Recording, to produce the LP in downtown Memphis. The two Memphians go way back. “Scott was in a band called Impala for many years,” Cartwright recalls. “And he also played bass with me and Jack [Yarber] on the Compulsive Gamblers’ Bluff City album.” As for Bomar’s studio, Cartwright says it has everything he needs to make a Reigning Sound album. “Working with Scott was really great,” he adds. “He also has the machine I like to record on, a Scully one-inch 8-track. I’ve worked on one-inch 8-tracks for the last four records I’ve made, and I’m kind of addicted to them now.” While having 24 tracks offers up more capability for overdubs, Cartwright said he prefers the limitations of the 8-tracks. “It’s super helpful when you get to the mixing process and your head isn’t still going, ‘What should I add?’ It helps streamline the process, and it helps me stay focused on each song so I can focus on what’s there instead of what’s not. Then I can just work on the sound.” And that sound is rich and full. For the new LP, Cartwright invited Elen Wroten (cello), Krista Wroten (violin), Graham Winchester (additional drums and percussion), and John Whittemore (pedal steel) to play on some of the tracks. Beyond that, Coco Hames (The Ettes, Parting Gifts) sings co-lead vocals on “Just Say When.”

The end result is a diverse tracklist of eleven originals that span Cartwright’s vast sonic universe. “Let’s Do It Again,” the album’s boisterous opener, captures the mundaneness and yearning that isolation creates, but with the backdrop of Reigning Sound’s signature foot-stomping rock ’n’ roll. It’s also delivered with optimism and a desire to reconnect with people, play records all night, and “dance like we used to do.” Elsewhere, on tracks like “I’ll Be Your Man” and “Oh Christine,” the LP decelerates and shifts into moody ballad territory—a delicate world Cartwright has long explored. Rounding out A Little More Time with Reigning Sound is a raucous cover of Adam Faith’s “I Don’t Need That Kind of Lovin’.” The 1965 single is a longtime staple at Reigning Sound shows, but this is its first appearance on record.

As for the lyrical meaning behind each track, Cartwright himself is hesitant to say. “Sometimes it takes months or years for me to realize what songs are about,” he reveals. “When I write songs, mostly it’s the melody I write first. The melody dictates what the mood is—whether it’s about being happy, confused, sad, lonely, or whatever… The melody speaks to a feeling. From there, my job is to translate that feeling into words. I try not to be too structured in how I think about that because the more ambiguous it is, the more people can read their own story into what you’re saying, and I think that’s important. On some level, I consciously don’t want to know what a song is about.”

Ambiguities aside, the LP closes with the poignant “On and On,” a song that reminds us that despite all of the highs and lows we face, “love is still a choice… love is the only choice.” It offers a glimmer of light. These days, that’s not a bad note to end on.