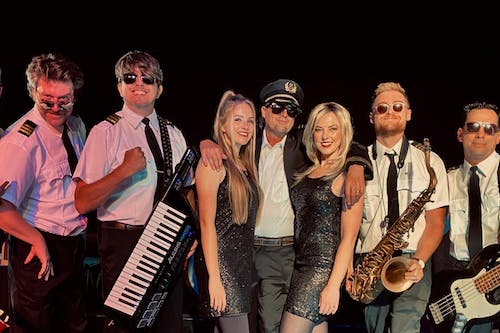 There are a multitude of historically significant dates and quotes associated with them. Some folks are actually aware of them:

And when the Captain speaks, his crew listens. It was then that the wildly successful Sydney based Australian yacht rock band would plot and ultimately embark on their first ever North American tour in the winter of 2020. After 18 months of negotiating with theaters, clubs, performing art centers, cruise ships, 4 foreign countries’ consulates, and their own government, February of 2020 arrives. And Australia’s biggest export since Crocodile Dundee and Oliva Newton John was off to the smoldering shores of Southern California.

After a week of rehearsals, another era that will live on in infamy blasted the world; Corona and the global pandemic. Not only was their tour canceled, but the band was unable to return back to their native Australia, as all international travel was grounded. And so it is that CAPTAIN PRINCE, his backup singers, the TALON TWINS, and the rest of the crew of THE FABULOUS YACHTSMEN have been residing in America and are now preparing ( again ) for their first North American Tour.

A bit about Captain Prince:

YES, HE IS A CAPTAIN. More specifically, a retired Captain from the Royal Australian Navy where for 4 years he was in charge of a Hobart class destroyer. Being the civilized bunch the Aussies are, there was little state sponsored action for Captain Prince but that did not mean life was boring. However, there is a good reason Captain Prince does not jog for exercise. That same reason explains why Captain Prince will not be seen playing rugby, or soccer, or many of the other normal things that most with dual stems routinely engage.

While on a routine Naval patrol mission off Australia’s Gold Coast, Captain Prince and his crew were anchored about 2 miles off shore. It was on a standard midafternoon break that some off duty officers and crew were swimming in the ocean when what was reported as a 14-ft Great White shark mistook Captain Prince’s left leg for Bindi Irwin.

And so in a flash, Captain Prince was a monopod, discharged from The Royal Navy, and did what any other one-legged former Australian Royal Navy Commander would do. He started a band, and the legend of THE FABULOUS YACHTSMEN was born.

So to the U.S. OF A. via Sydney, Australia courtesy of a 14-ft Great white shark………….. we present to you THE FABULOUS YACHTSMEN…………